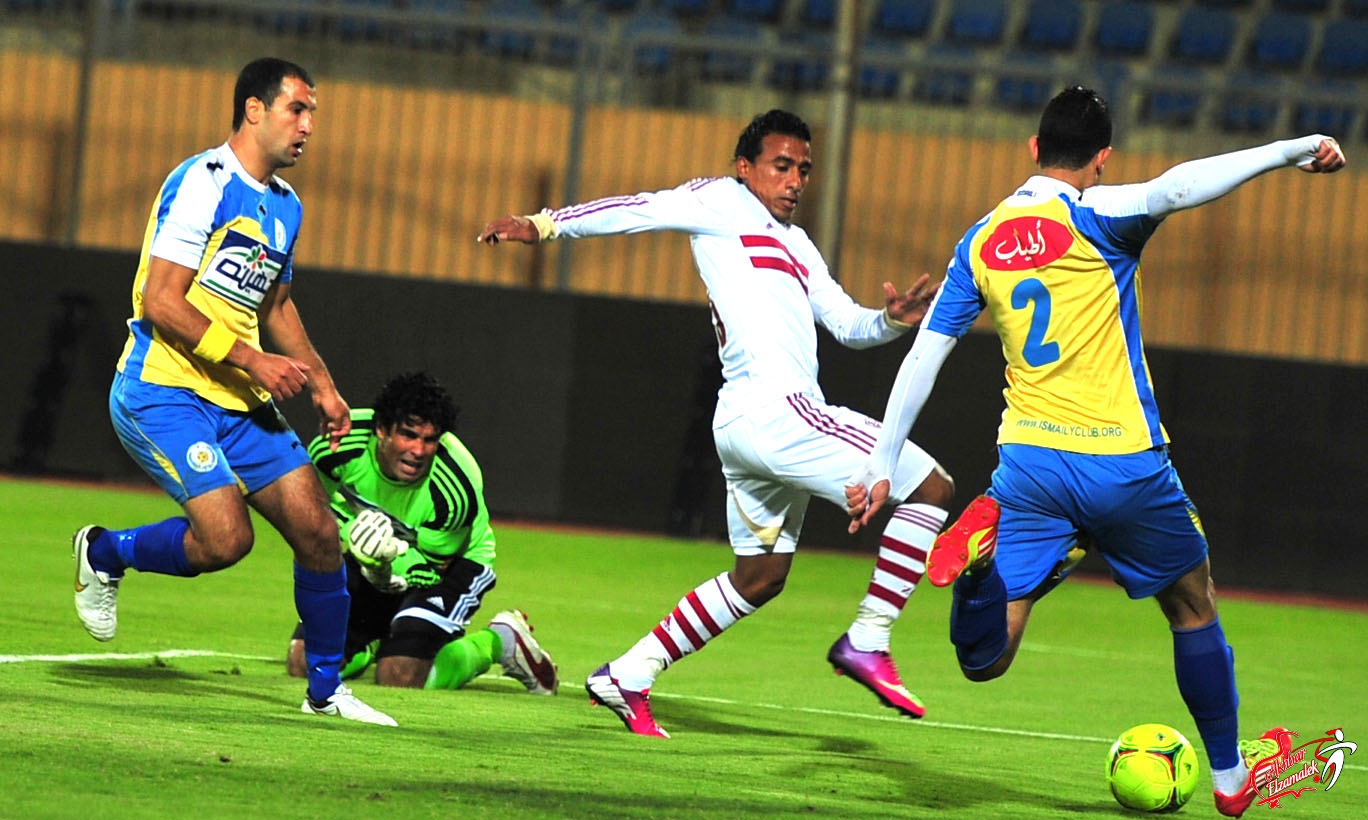 Ahmed Nasri on his debut for KingFut.com gives a tactical analysis as Zamalek maintained their Group B lead with a well deserved victory over Isamily to go six points clear with full marks (24 points from 8 games).

Jorvan Vieira made a few changes in his squad selection comparing to the previous game against El-Gaish. Current Egypt No.1 goalkeeper Abdul-Wahed El-Sayed and left back Sabri Rahil returned to the starting XI, while Hazem Emam found himself out of the selected 18 players and Ahmed Eid Abdel-Malek once again was sitting on the bench. Vieira counted on Sabri Rahil and Abdel-Shafy on the left flank while Ahmed Samir and Mohamed Ibrahim occupied the right side of the pitch. Two clear defensive midfielders in the heart of the field and Ahmed Gafaar as a loner striker, giving the shadow striker role or the ‘number ten role’ to veteran midfielder Ahmed Hassan, making the formation a 4-2-3-1/ turning into a 4-4-2 when Zamalek were in charge of the game.

Sabry El-Miniawy counted the most on his players’ individual skill and counter attacks to score. He made very few obligated changes in his lineup due to injury and match priorities as he has a must win game against USM Alger this week. Without Ahmed Ali and Amr El-Sulaya,  Ismaily started the game with two strikers and a free role in play making for Omar Gamal, 3 in the center of the midfield with just one with defensive intentions; to make the formation a 4-3-1-2/ turning into a 4-1-3-2 when the team controlled possession of the ball.

As expected, Zamalek’s players controlled the possession throughout the game, especially in the second half. Still, Ismaily could have taken the lead early in the first half on two occasions by Ahmed Khairy – who has notably developed his scoring and dribbling skills this season – and Omar Gamal tirelessly attempting solo efforts. The individual talent of Zamalek starlet Mohamed Ibrahim and Jorvan Viera’s tactical changes in the second half made the difference for the White Knights and secured their eight successful win in a row.

With almost 9 players from both teams located in the center of the pitch, the midfield battle was physically not easy at all. Zamalek parked two players with straight defensive duties (Nour El-Sayed and Ibrahim Salah) to be the first defensive barricade and limit the danger of Ismaily’s midfield trio who supported the attack, especially the skilled dribbler Omar Gamal  and the in-form Ahmed Khairy, who had 5 shots, but only 1 on target. Also, the defensive midfield duo gave Zamalek’s attacking trio Abdel-Shafy, Ahmed Hassan and Mohamed Ibrahim more space and freedom to stretch the play on the wings with good defensive covering. On the other hand, Ismaily lost possession most of the time duo to the lack of good movement and Zamalek’s unstoppable pressure on the wings. This made the job easier for Zamalek’s centre-backs and midfielders to play comfortably and freely build-up their attacks.

Jorvan Vieira’s main focus and tactics was to build strong wings to attack from and to prevent Ismaily’s crossing to Essam Ali and Nigerian Godwin as they boast clinical headers. On the left flank, Rahil and Abdel-Shafy produced 9 crosses combined while forcing Sherif Ragab to just two in 63 minutes of play until being replaced.
While on the right flank, Ahmed Samir didn’t go forward often, leaving the job for Mohamed Ibrahim, who made 8 crosses himself and forcing Karim Mossad to stay in the defensive third all game (Mossad produced just 1 cross until being replaced and was beaten by Ibrahim on 5 occasions, including the first goal).

Despite the loss, we cannot deny the magnificent moments by Omar Gamal and Ahmed Khairy in the game, especially in the first half. The duo are both remarkably skilled and have a good eye for goal. Omar Gamal – who is known as ‘Ismaily’s Maradona’ – completed 8 successful dribbles, produced 2 key passes, had 2 shots (none on target) and was a constant threat to Zamalek’s defense. While Ahmed Khairy – who’s on the verge of a potential move to Cairo giants Al-Ahly – had the best two chance for Ismaily throughout the game and was very close to open the scoring but his luck was out.

Jorvan Vieira was the first to make changes by taking off Ahmed Hassan – who didn’t make any major impact but committed 4 fouls in 59 minutes of play – and brought on Ahmed Eid Abdel-Malek to give Mohamed Ibrahim more space to play his beloved role as a free playmaker. After few minutes of this change, Zamalek scored twice!!!
El-Miniawy seemed to finally realize that both of his flanks were invaded throughout the match, so he took off full-backs Sherif Ragab and Karim Mosaad and brought on Ahmed El-Gamal and Ahmed Abdelaziz ‘Mody’ respectively. The change of positions didn’t add anything significant to mention.

While Vieira felt comfortable with the performance and the result, he took off goalscorer Ahmed Gaafar and brought on Burkinabé Abdoulaye Cissé. Former ENPPI midfielder Islam Awad finally made his debut this season replacing Sabri Rahil, which meant that Abdel-Shafy returned as a left-back.

El-Miniawy tried to get something out of the match despite being two goals down; he sought to retain more possession in the midfield by bringing on Egypt veteran ‘Al Maestro’ Mohamed Homos and took off the out-of-shine Mohab Said. It was a good change, but a very late one.

Man of the Match

After Shikabala was loaned to Al-Wasl in UAE, people were wondering who will take over building the attacks and dishing out assists and key passes for Zamalek?! The answer is Mohamed Ibrahim. The 21-year-old Egypt international midfielder has made everything you would ask a playmaker for so far this season (assisting, scoring goals and not to mention, entertaining the fans with his magical skills). During the game vs. Ismaily, Ibrahim completed 13 successful dribbles (more than any other player in the game), produced 2 key passes, made 8 crosses, had shots, assisted a goal and finally scored his own solo effort with a brilliant outswinging shot from inside the box. He was obviously involved in every dangerous attack for his side and was a constant threat whenever and wherever he had the ball. Mohamed Ibrahim is a player with very high potential, who still has many hidden skills to show in the future. 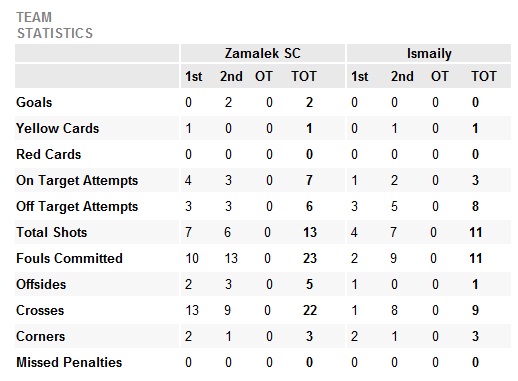