On Wednesday, KingFut.com published an interview with who we believed to be Portugal international Nelson Oliveira, who spoke about having Egyptian roots, until we later confirmed the account was fake.

After I was personally following ‘Nelson Oliveira’ for months on what appeared to be his official Facebook account, I decided to take a wild shot and message him to see if he would be willing to be interviewed on our site. I was interested in Nelson’s story, since hearing Mido mention Nelson Oliveira’s supposed Egyptian origins a few months ago on his football program ‘El Alamy’ on TV. I thought, if this rumor was true, it would be a blockbuster in Egypt, and I wanted to tell it in English. I had to confirm with the player to know more first. 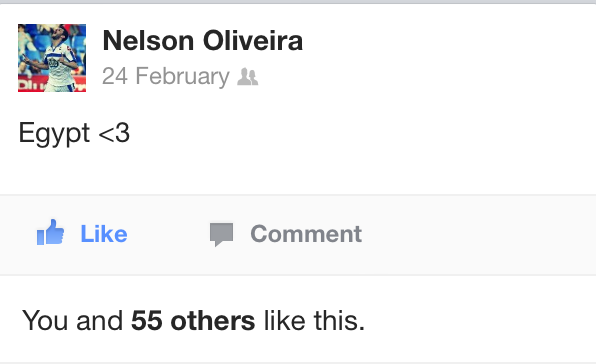 I sent ‘Nelson’ my email and made my request for an interview and he responded almost immediately to my surprise, and insisted on doing the interview over Facebook instead – something I have personally never done before. His story matched everything I had heard on Mido’s show, he even said, “Mido is my friend, I always message him.” I asked him for a picture of confirmation with ‘KingFut.com’ written on a piece of paper after we conducted the interview, and he agreed, but kept on delaying the picture we would never receive with various excuses when I reminded him, “it’s late and I have a game tomorrow,” for example. I was anxious to release the interview, especially since I was already convinced this was the Nelson I was looking for. Unfortunately, the confirmation I sought out from this interview only came after it was published, when I later received confirmation the account was a fake.

We were even warned prior to publishing the interview by our colleague AbdulRahman Magdy, who said there was a false account impersonating Nelson, but I tried to assure him it must not have been this one as there were numerous others which were clearly unofficial. The Facebook account opened in 2010 had it all: Nelson’s personal pictures with friends and family, statuses after every match located from A Coruña, Spain – where Nelson is on loan with RC Deportivo – regular interactions with Portuguese players (Alex Freitas and Salvador Agra, for example), and of course, 5500+ followers. Also, whoever was behind this account spoke Portuguese, Spanish, English and even a little bit of Arabic. He also new Nelson’s life story inside-out, although, he added an Egyptian twist, much to my interest. Not to mention, there is also a Twitter account (@NelsonOfficiial) which is directly associated with the Facebook account, and many people believe it to be the real Portuguese star, but it is also indeed fake.

Once we were alerted by our friends in Portugal that the Facebook account’s authenticity was in doubt, we quickly unpublished the interview from our website until we could confirm 100% that this was truly Nelson’s official account. Thankfully, it didn’t take long. KingFut’s Ahmed Nasri who we later found out also works with Sports Marketing Manager Pedro Moreira Santos (who manages the accounts of Cristiano Ronaldo, Pepe and even Nelson Oliveira) received confirmation from Pedro that the account was a fake. When I later sarcastically prompted the fake Nelson to send me a picture of confirmation again, he deactivated his Facebook, telling me the interview has caused him too many problems already. 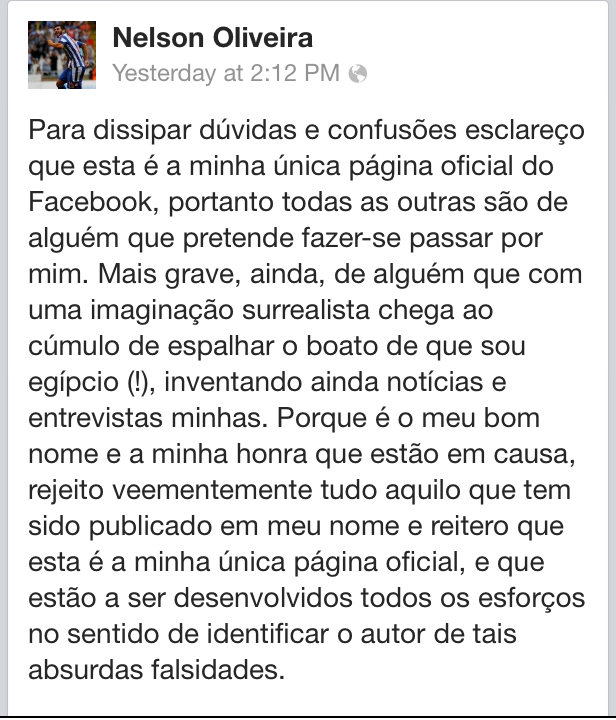 Later, Nelson released an official statement on his OFFICIAL Facebook page to confirm the rumors of him being part Egyptian are not true. Unfortunately, we took the long route to uncover the truth of these rumors in Egypt.

This was an unusual situation for us, we uncharacteristically fell for the deception as we’ve seen major publishers do at times, including The Times, when they admitted to making a massive mistake for releasing a false story on Qatar’s alleged ‘Dream Football League’.

We can’t say for sure who was behind this account, but we have a feeling Mido Ashraf might be able to tell us more, as ‘Nelson’ said this was his “brother from my father’s side,” when asked.

As we are an Egyptian football website who seek to give professional coverage and avoid blatant rumors, I sincerely apologize on behalf of KingFut.com to our readers for being a platform for this fraud’s fake story, even for half a day. We especially apologize to those who believed this story as we did, those who may have been angered by its clear falsehood, and of course, to Nelson Oliveira and his family. We will definitely make sure to be 100% certain before publishing next time.

If there was any positive to come out of this, it is that we closed the case on this rumor in Egypt (and the fraud’s Facebook account), which was around long before our interview. Nelson Oliveira has no Egyptian roots, and Ramy Ashraf is not his real name.

The only thing that will not change, if we get a story wrong, we will hold our hands up and admit it.

Co-Founder, Chief Technology & Content Officer of KingFut.com. Goal with KingFut is to scout and promote Egyptian talent – both local and abroad – who don’t receive the credit and coverage they deserve. Graduated from the University of Toronto with a B.A.Sc in Electrical Engineering and have previously featured on BBC World Service, 5 Live, Chelsea TV & more.