Egypt’s Mohamed Salah inspired Chelsea to a 3-0 victory over Stoke City on Saturday to help bring Mourinho’s side back to the top of the English Premier League table.

With Eden Hazard and Oscar rested ahead of Chelsea’s Champions League clash with PSG next Tuesday, 21-year-old Egypt international Mohamed Salah was given his first start for the Blues against Stoke City on Saturday.

Salah, who scored his first goal for Chelsea a fortnight ago against Arsenal, was involved in all three goals at Stamford Bridge, which lifts Mourinho’s side back to the top of the Barclays Premier League.

The Egyptian winger opened the scoring for the Blues after 32 minutes, converting Matic’s cut-back with his left foot from just inside the box.

On the hour mark Salah won a penalty for Chelsea after Hazard back-heeled a pass towards the Egyptian, who was brought down inside the box by Andy Wilkinson.

Lampard missed the spot-kick but managed to covert the rebound to put Chelsea 2-0 up on the 61st minute.

10 minutes later, Salah was again directly involved in a Chelsea goal, finding Brazil international Willan who curled the ball beautifully into the corner.

Chelsea are now on 72 points after 33 games, but Liverpool and Manchester City could both leapfrog over them if they take advantage of their games in hand. 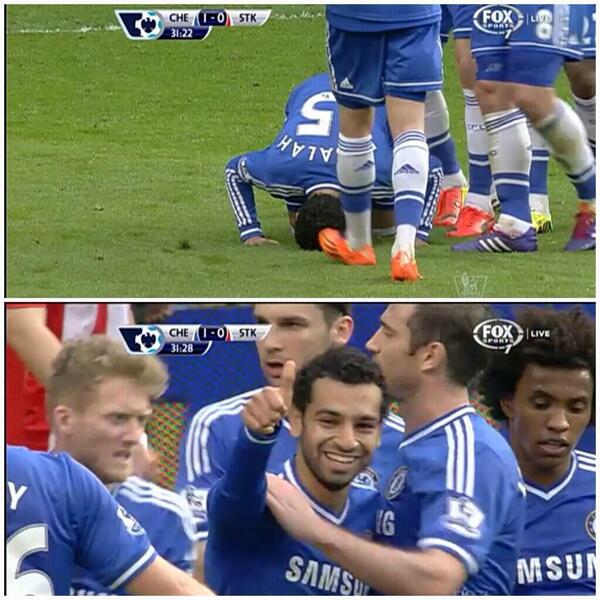