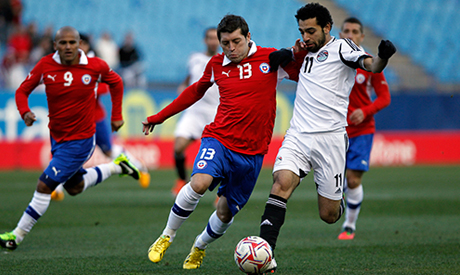 Egypt are set to go head-to-head with Chile at 00:30 AM GMT (3:30 AM Egypt time) in Santiago in preparation for the South Americans’ World Cup campaign in Brazil, which kicks-off in a fortnight.

KingFut.com partners EgyptStats, who have helped compile a list of statistics about the two sides’ previous meetings, and individual player stats to help jump-start the enthusiasm of the supporters before the late kick-off, which is due 3:30 AM Egypt time on Saturday.

2 – Chile have scored only 2 goals against Egypt in the past three meetings.

3 – Egypt have met Chile only 4 times in history: 3 friendlies and once in the Olympic games, winning 3 and losing one.

4 – This will be the fourth friendly match between the two teams. Egypt aim to achieve their third win after scoring 9 goals in their previous meetings.

6 – The biggest result between the two sides was on the 13th of November 1963 when Egypt have crushed Chile 6-0 in Friendly Games of GANEFO in Indonesia, the scorers were: Badawi Abdel Fattah, Shahin (2), Helmi Soliman (2) and finally Abdou Noshi!

10 – 21-year-old Mohamed Salah only needs two more goals to be one of the top 10 scorers with the Egypt national team in history (Mido & Gedo both 19).

2013 – However, the last match between the two teams ended in a 2-1 win for Chile on 6 Feb 2013, Mohamed Salah scored Egypt’s only goal (assisted by Omar Gaber from a clear-cut chance).