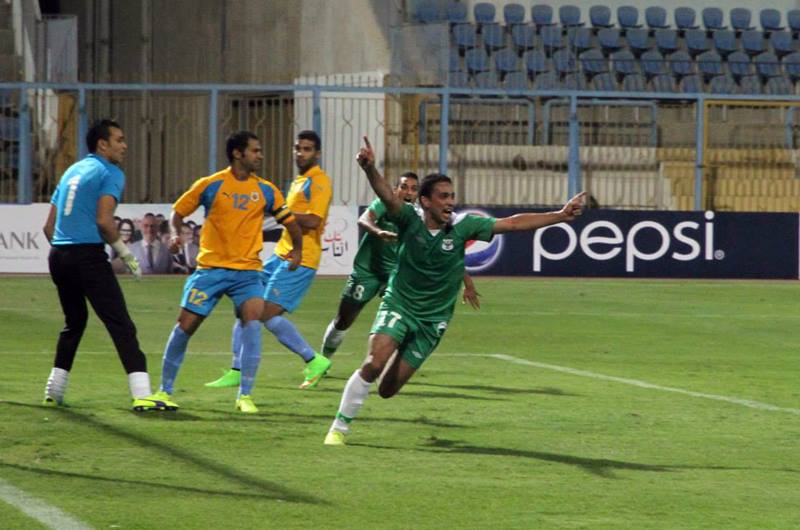 Al Masry managed to snatch a late 2-2 draw against rivals Ismaily in the Canal Derby on Tuesday night at the Ismailia Stadium.

The Dervishes took a 2-0 lead through new arrival Kelechi Osunwa before a Hamada Yehia penalty and a Hosni Abd Rabo own goal made it 2-2.

Early on in the game it was Ismaily who came close to scoring when Amr El-Solaya’s half-volley was parried away by goalkeeper Ahmed Massoud.

New signing Kelechi Osunwa had the chance to put his side in the lead, combining really well with Hosni Abd Rabo before unleashing a strike which went over the bar.

Minutes later, Heron Ricardo Ferreira’s men opened the deadlock through Osunwa who latched onto a Solaya pass and composed his finish past Massoud, much to the dismay of Tarek Yehia.

Ismaily got the second soon after, Amr El-Solaya’s chip pass was finished off by Osunwa to double his tally for the night.

The Yellows were running riot, and could’ve tripled their lead when Ahmed Samir Farag unleashed a swerving shot from distance only to see it slam against the woodwork.

Early on in the second half, Tarek Yehia made his first change by taking off Abdallah El-Shahat and putting Mahmoud Abdel-Hakim on.

Abdel-Hakim had almost an instant impact when he came on, playing a cross in for the barging Amr Moussa whose header slammed against the post.

Minutes later, the former Petrojet man put in a cross Mahmoud Gabr, but the latter failed to wrap his head around the ball.

Substitute Hamada Yehia stepped up and cooly converted his penalty on Essam El-Hadary’s right to pull one back for the Eagles.

Ismaily could’ve widened the gap through Hosni Abd Rabo’s diving header, but the ever-present Massoud managed to parry it away.

Ricardo’s men would soon rue their missed chances as skipper Abd Rabo put through his own net seven minutes from time to make it 2-2.

Ahmed Massoud once again made a spectacular save to deny Mahmoud Hamad two minutes from time, keeping Al Masry in the game.

In the final minute of injury time, Mahmoud Gabr went one-on-one with Essam El-Hadary only to blast his finish over the bar.

Al Ahly fanatic and Italian football aficionado. Working on a degree in Business Administration at the American University in Cairo.