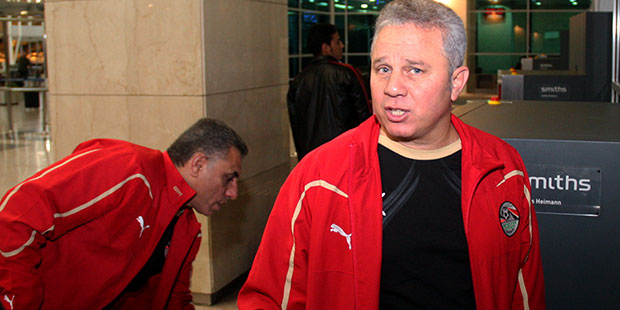 Egyptian national team manager Shawky Gharib has hinted that he might be forced to alter the team’s playing style, after Amr Gamal was ruled out for up to six months with an anterior cruciate ligament tear.

As a result, Egypt will be forced to look elsewhere for a striker in their final two group games in AFCON 2015 qualifiers.

In an interview with pundit Ahmed Shobeir, Gharib expressed his sadness at losing Gamal, while simultaneously praising the young forward.

“When you see a young player, give him a chance, and he performs, it’s naturally disappointing when something like this happens,” expressed Gharib.

The 55-year-old discussed the possibility of calling up some of the ‘old guard’, but insisted that he would only pick club regulars, and that he would monitor a wide range of players over the next few days.

“There are some positions in which we lack depth, and the striker role is one of them. I cannot pick a player until the next two league rounds are over.

“I don’t have any problem with calling up a player as long as they feature regularly for their clubs.

“There are several players that are starting to stand out in the league, and we are monitoring all of the [Egyptian] league players.”

When asked about Walid Soliman, Gharib was adamant that the Ahly winger would face a fine for his actions against Assiouty which earned him a four-match ban in the league.

Nevertheless, Soliman will be considered for a spot in the squad to face Senegal and Tunisia.

“After the Ahly-Ismaily game, we made it clear that players must remain composed at all times, because a sending off during an important match could cost us the whole tournament;  any player with disciplinary issues in the league will be fined by the national team management.

“Notwithstanding any injuries, he [Soliman] will join the squad,” Gharib concluded.

Egypt face Senegal in Cairo on the 15th of November, before traveling to Tunisia four days later for the final game of AFCON qualifying.