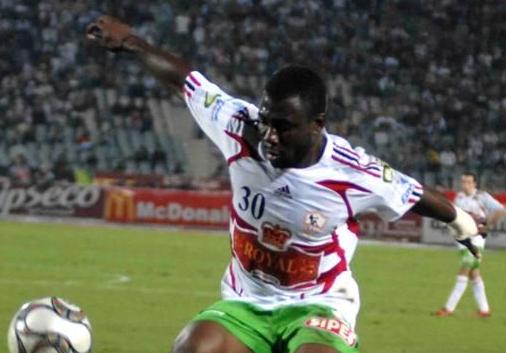 Former Zamalek SC player Rahim Ayew, who now plays for Ghanaian champions Asante Kotoko, has been and attacked and injured by armed robbers.

The grave incident occurred during the early hours of Wednesday, when well-armed thieves broke into the residence of the former Zamalek player; a struggle ensued, one that led to a wound in his right arm after he was shot at.

A source told Allsports.com.gh: “Rahim was playing video games at home early this morning when he heard noises on his property. He checked his curtains only to be met with a masked man who asked him to open the doors or be shot.”

“He refused and moved away from the living room area but the robbers used a heavy object to break down his door.”

“Upon entry one of the robbers hit Rahim with his weapon and fired a shot at him, grazing him. They then took his flat screen TV, his shoes, phones and some money.”

The 26-year-old versatile player has filed a compliant with the East Legon Police, who have already begun investigations.

Rahim, who happens to be the eldest son of Ghana legend Abedi Ayew Pele, joined Zamalek in 2009 from Eleven Wise. He made 11 apperances for the White Knights, scoring once.